Shrunk by Vlad, then grabbed and licked excessively by Wayne's kids

Bela is the main antagonist of Hotel Transylvania 2. He is Vlad's Former sidekick and the leader of Vlad's bat cronies as he is a bat cronie himself.

He believes that humans and monsters shouldn't communicate together, see each other, or be with each other.

Bela is first seen with Vlad when Vlad receives his letter from Mavis inviting him to Dennis' fifth birthday party.

Bela at first seems angry that Vlad's family never told him about another child being born, but Vlad calms him down. When Vlad reads the letter and finds out that the party is at a hotel, he likes it, but gets angry and believes humans are at the hotel. This causes his army of bat cronies to go crazy and start flying around the cave as Bela roars. But Vlad calms Bela and his army down, letting them know that he raised his son to hate humans and eat humans. When Vlad and Bela arrive at the Hotel for the party, Bela smells humans and says they should tear the place down. Vlad reminds Bela that he's gonna smell humans in the outside world and instructs him to wait for him outside, claiming this is "family business". Bela reluctantly agrees, but decides to spay and look through the window to observe.

Later in the aftermath of Dennis' birthday party, Bela watches as Dennis and Winnie run away from the hotel. He is getting suspicious and starting to think Dennis is a human. Bela goes crazy when he finds out that there are humans in the hotel. He follows close behind Dennis and Winnie, watching them as they travel deeper into the forest. Eventually Bela catches up to them and attacks the two in Winnie's treehouse. Winnie tries to defend Dennis, telling Bela that he is wrong, but Bela angrily retorts that he is not. He then tells Dennis and Winnie that he is holding them hostage to lure everyone away from the hotel so he and his minions can destroy it. Dennis tells Bela that it would make his grandfather sad, but he is dismissed and mocked at when Bela calls him a "weak little boy."

As Bela teases Dennis, Winnie bites Bela's hand. Bela shouts in pain and throws Winnie to the ground, causing her to whimper in pain. Seeing this, Dennis erupts in rage and finally transforms into his Vampire self and attacks the fiendish Bela. While fighting with Dennis, Bela calls out for his army of cronies to assist him. Dracula and the rest of the gang arrive and help in fending off the army of demonic bat creatures. Bela tries to fight back, but Dennis manages to use his newfound strength to defeat him. In a last ditch effort Bela, refusing to flee, lunges toward Johnny to stab him with a sharp branch, but is stopped in mid-air by Vlad, as he has had a change of heart. Levitating him in the air Vlad warns Bela to never come near him or his family again, and shrinks him down in size where he is then grabbed and licked by the Werewolf Kids. He is like grossed to death. 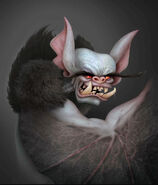 Early concept art for Bela
Add a photo to this gallery

Bela senses Humans at the Hotel

Bela yelling at Vlad, telling him the likely possibility that there are Humans at Hotel Transylvania

Bela looking through the Hotel window

Bela is calling his crew

Bela defeated
Add a photo to this gallery
Retrieved from "https://hoteltransylvania.fandom.com/wiki/Bela?oldid=54881"
Community content is available under CC-BY-SA unless otherwise noted.