Her name is not mentioned in either of the films but is found twice the Hotel Transylvania 3 Movie Novelization.[1]

The Invisible Woman as her name suggests is completely invisible, with the exception of triangular thin glasses and a beaded pearl necklace that are the only things that can be seen.

Throughout the film, a recurring gag is that Griffin mentions that he has an invisible date who he later refers to like Emily, even though his friends think he is just pretending that he has one.

Towards the end of the film, Griffin bumps into an Invisible Woman and they dance with one another.

She returns and this is her first speaking role. 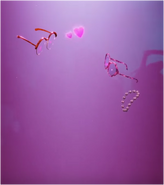 Retrieved from "https://hoteltransylvania.fandom.com/wiki/Crystal?oldid=54746"
Community content is available under CC-BY-SA unless otherwise noted.