Start a Wiki
watch 01:40
'Hotel Transylvania' Lore: Eunice
Do you like this video?

Eunice has light blue skin, green eyes and wears a 60's styled black and white hair. She wears a furry purple turtleneck with a dark purple high-waisted skirt, a pink and black-striped headband and gold hoop earrings. She also has blue eyeshadow, red lips and painted dark pink claws. Her eyes are a bit mascared. She also wears a pair of dark pink high-heel shoes.

Eunice is a loud and bossy person who is sometimes annoying. However, she is also caring, like when she showed concern when Mavis told her that she was going out to a human village. What Frank lacks in forcefulness, Eunice more than makes up for. She is critical, brash and can have an 'in your face' attitude, but underneath it all, she's a loving family woman.

Eunice first arrives at the hotel with her husband Frank through postal shipping to attend Mavis' 118th birthday party. Later when she goes to greet Mavis in her room she is horrified to hear that her father, Dracula, has allowed her to leave the hotel and go meet some humans. Gripping onto Mavis as she tells Drac the entire reason he built the hotel was to keep them safe from humans. When Mavis left, everyone realized that Dracula was gone not knowing that the village was Dracula's plan to make Mavis believe that humans are bad. After Dracula returned & discovered that his plan lead a human named, Johnny into the Hotel, he disguised him as Frank's right arm cousin, Johnnystein.

Eunice later accompanies everyone at the pool as she conversations with Johnny impressed that he has been to so many places. She plays chicken fight with Murray.

The following day she attends Mavis' party. She is shown to be disgusted after Dracula reveals his lies to Mavis. After Johnny reveals he is a human, she along with everyone else, tries to check out of the hotel. She becomes outraged at Dracula about how he lied about Johnny being a human to them, but after Dracula opens up to them and explains to her and everyone else that Johnny and Mavis 'zinged.

After Dracula got Johnny back, she attends the ending party where Mavis and Johnny sing about their love for each other. She is last seen dancing on a floating table with her husband, Frank.

Eunice doesn't make much of a speaking appearance in the sequel.

She is first seen among the group of people attending Johnny and Mavis' wedding.

Later she comes to Dennis' first birthday. She along with her husband, Frank, give their present, a child guillotine toy, to Mavis for Dennis. Mavis thanks Eunice, but quickly takes it away stating that she needs to 'baby-proof' it. Eunice shows some confusion towards Mavis, not understanding the point in baby-proofing a guillotine. "So you cut your finger off, it's part of the fun." she says.

She plays volleyball in the pool, but her hair gets wet.

2d Eunice with her arms and 2d Frankenstein's upper torso and legs.

" We have a gift that we hope is acceptable" - Eunice. 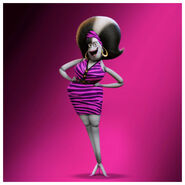 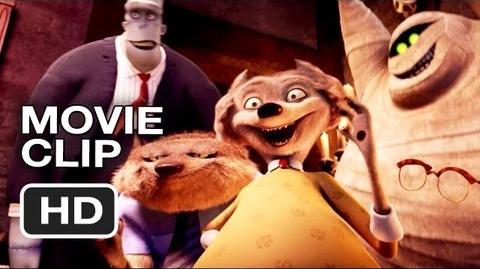 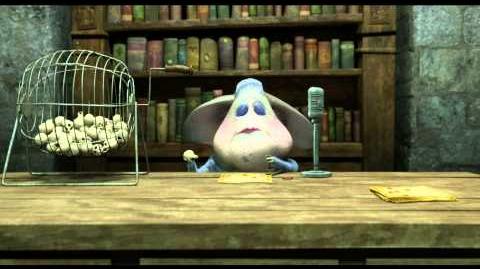 Retrieved from "https://hoteltransylvania.fandom.com/wiki/Eunice_Stein?oldid=49497"
Community content is available under CC-BY-SA unless otherwise noted.