In 1897, Dracula (Adam Sandler) and his friends disguised as humans are traveling on a train to Budapest. However, Professor Abraham Van Helsing (Jim Gaffigan), Dracula's arch-enemy, boards the train and unveils the monsters; the monsters escape by climbing through the roof, and Dracula pushes his friends from the train for their safety. Van Helsing is obsessed with destroying Dracula but is constantly outsmarted by him.

In the present day, some time after the events of the previous film, Dracula is running his hotel business smoothly, with his daughter Mavis (Selena Gomez) and son-in-law Johnny (Andy Samberg). However, Drac is depressed by the fact that he has remained single since his wife Martha's death, in spite of his attempts to meet someone. Misinterpreting this as stress from overwork, Mavis books a cruise so they can all take a break and spend more time together as a family. The next day, Dracula, Mavis, Johnny, Dennis (Asher Blinkoff), Vlad (Mel Brooks), and the hotel guests board a cruise ship called the Legacy. Dracula sees the ship's human captain, Ericka (Kathryn Hahn), and immediately falls for her, something that he thought was impossible as he had already "zinged" before.

Ericka goes to a secret room on the lower decks where she meets Abraham Van Helsing, who is revealed to be her great-grandfather and is almost completely mechanised, to avoid death. Van Helsing has a plan to eliminate all the monsters, in the cruise upon its arrival at the lost city of Atlantis using an Instrument of Destruction, which could be found in Atlantis's ruins. Van Helsing makes Ericka promise to not assassinate Dracula beforehand, but she repeatedly attempts to do so anyway, albeit unsuccessfully, much to her frustration.

After failing to kill Dracula at an underwater volcano, Ericka moans about being unable to get him. Dracula's friends hear this, and thinking that Ericka likes him, inform Dracula about what they heard. Dracula nervously asks Ericka out on a date, and she accepts since she sees this as another chance to kill the vampire. However, as they dine on a deserted island, Ericka unexpectedly begins to fall in love with Drac, after they learn about each other's pasts.

Mavis finds out Dracula is interested in Ericka and becomes suspicious of Ericka's motives. The cruise ship reaches Atlantis which has been converted into a casino; Dracula decides to tell Mavis the truth about Ericka but gets distracted seeing Ericka going into a crypt below the city. Drac follows her, with Mavis not far behind, and learns that Ericka is after a "family heirloom." With Dracula's help, she gets past the numerous booby traps around the object, and escapes. Mavis arrives and confronts them, and Dracula confesses that he "zinged" with Ericka, to Mavis's surprise and confusion. After Ericka is told what a "zing" is, she harshly rejects Dracula's romantic feelings, leaving Dracula heartbroken.

A regretful Ericka gives Van Helsing the object--revealed to be the Instrument of Destruction--and he proceeds to set a trap for the monsters, at a dance party. Noticing that Dracula is still upset, Mavis, after some advice from Johnny, tells her father to talk to Ericka, admitting that she was afraid of him leaving her, which Drac allays. Suddenly, Van Helsing shows up and pushes away the DJ, and a saddened Ericka is forced to reveal that she is his great-granddaughter. Van Helsing unveils the Instrument of Destruction, a case for a music note sheet, and plays a song that drives a friendly Kraken (Joe Jonas) living near the island to attack the monsters. Ericka saves Dracula from the Kraken and pleads with her great-grandfather to stop the destruction, confessing to Drac that she fell in love with Dracula as well, which infuriates Van Helsing and causes him to attack them both.

In order to pacify the Kraken, Johnny opens up a portable DJ kit and starts playing positive songs to beat Van Helsing's song. Upon playing the Macarena, the Kraken is relaxed and happy for good; Van Helsing is unable to counter the song as everyone begins to dance, including the music sheet (which shreds itself to tiny pieces, in the process). Van Helsing also ends up dancing and accidentally slips and falls but is saved by Dracula. Touched by this act of kindness, Van Helsing apologizes to the monsters and gives everyone a full refund for the cruise, before sending them back.

Back at Hotel Transylvania, Dracula and Ericka have ended up in a romantic relationship. Drac proposes to Ericka, who stammers at the question, and she agrees to the proposal.

It was originally stated that the previous films director, Genndy Tartakovsky, would not be returning to direct the third film. However, on June 20 2016, Genndy confirmed that after a change of mind he would indeed return to direct Hotel Transylvania 3.[2]

On February 6th, 2017 it was announced that the movie would be released on July 13, 2018 in the US instead of September 21st like they had originally planned.[3]

On the review aggregator website Rotten Tomatoes, 62% of 119 reviews are positive, with an average rating of 5.5/10. The website's critical consensus reads, "Hotel Transylvania 3: Summer Vacation delivers exactly what fans will expect – which means another 97 agreeably lightweight minutes of fast-paced gags and colorful animation." Metacritic, which uses a weighted average, assigned the film a score of 54 out of 100 based on 23 critics, indicating "mixed or average reviews". Audiences polled by CinemaScore gave the film an average grade of "A–" on an A+ to F scale, the same score earned by both its predecessors.

IGN gave the film score of 7.6 out of 10, saying, "Hotel Transylvania 3: Summer Vacation is mostly funny, BLAH-blah-BLAH!" Conversely, Scott Tobias of Variety gave the film a negative review, stating, "That leaves Hotel Transylvania 3 to look too much like another lackadaisical gathering of Sandler and his frequent on-screen chums, like a PG-rated Grown Ups at sea. They seem like the ones taking the vacation, and it's audiences who are left to pick up the tab." Brian Tallerico of RogerEbert.com wrote, "Trust me, I know that "storytelling" is not the main reason that kids go to third films in a franchise—I have two of my own that love this particular series—but I'm speaking more to the adults who have to pay for the ticket and waste their time here. Kids go for the familiar faces, repeated jokes, and comfortable world they feel they know. Hotel Transylvania 3 gets enough of that right to allow it to stand above the truly abysmal summer animated offerings of recent years (I'm looking at you, The Nut Job 2 and The Emoji Movie). It's not that bad. It's more forgettable than painful. When it was over, I asked my 9-year-old what he would give it. He replied, "I would give it 4 stars but I'm a kid. I'd probably give it 3 if I were an adult." Not quite."

Brian Lowry of CNN wrote, "Creatively, though, unlike the best animated franchises, whatever sense of discovery, surprise or ingenuity that Hotel Transylvania originally offered appears pretty well behind it. That might not mean it's checkout time just yet, but all that seems left is to dig up the pieces, stitch them together, and flip the "on" switch." Scott Mendelson of Forbes gave the film a positive review, saying "Hotel Transylvania 3 feels less like a narrative sequel and more like a casual "episode of the week" animated adventure. When you can watch the TV show at home, the movies must be relative events. This one feels less like an inspired PG-rated, kid-friendly distillation of Sandler's comedy than an animated version of his (comparatively) lazy studio comedies where he and his regular castmates go on a vacation on the studio's dime. The movie looks great, there are a few chuckles, and the kids may enjoy it. But compared to its predecessors, Hotel Transylvania 3 is mostly blah (blah blah)." Jamie Righetti of IndieWire wrote, "With plenty of laughs, truly dazzling animation, and some more of the franchise's signature dance sequences, Hotel Transylvania 3: Summer Vacation is a summer treat worth savoring, and a reminder that if we can see past our differences, we'll find we're not that different after all."

Chris Nashawaty from Entertainment Weekly gave the film a B-, saying "The harmless high jinks all go down easily enough without being particularly memorable or pushing the art form past the expected. Three movies in, the Hotel Transylvania series is undeniably getting a bit long in the fang. It's maybe one more sequel away from having a stake mercifully driven through its heart. Still, it's hard to argue with the sight of an airplane piloted by mischievous gremlins or the film's benign messages of the importance of family and love conquering all. I may have spent large stretches of the film rolling my eyes, but my 5-year-old twins' attention never flagged. Even if, in their eyes, Summer Vacation was no Lego Movie. Then again, for them, nothing could be." Rafer Guzmán of Newsday stated, "In the end, the noisy humor and classic rock songs drown out whatever worthy messages Hotel Transylvania 3 might offer." Geoffrey Macnab of The Independent gave it 2 out of 5 stars, saying "In its scattergun way, parts of the film are funny and very inventive. The hitch is that the storytelling feels so utterly random. All sorts of unrelated ideas are thrown together into the big, sloppy, monster mash of a plot as the cruise continues. The end message, namely that monsters and humans aren't that different and really ought to learn to get along, is sanctimonious in the extreme. Maybe it is time to put a stake through the heart of this particular franchise."

A video game based on the film, titled Hotel Transylvania 3: Monsters Overboard, was released for Microsoft Windows, Nintendo Switch, PlayStation 4, and Xbox One on July 10, 2018. It was developed by Torus Games and published by Outright Games. While Keegan-Michael Key was the only one to reprise his role from the film, the rest of the cast consists of Brock Powell as Count Dracula, Melissa Sturm as Mavis, Michael Buscemi as Wayne, Julianne Buescher as Ericka, Danny Gendron as Frank, and Brian T. Stevenson as Johnny. Margaret Tang voice directs the video game. 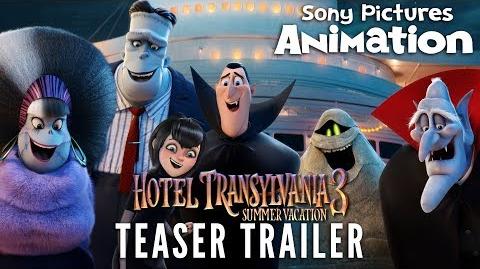 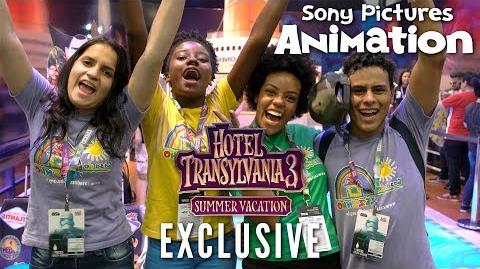 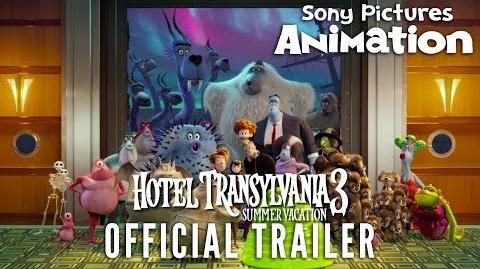 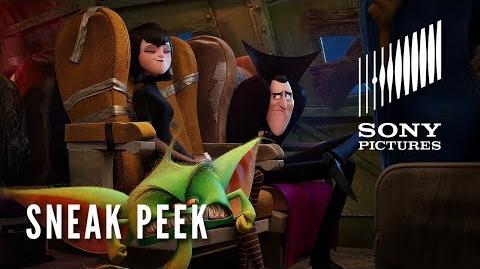 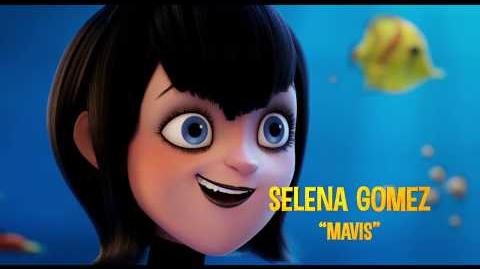 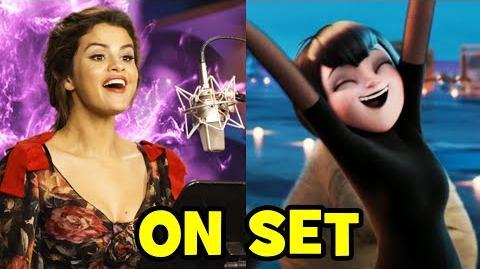 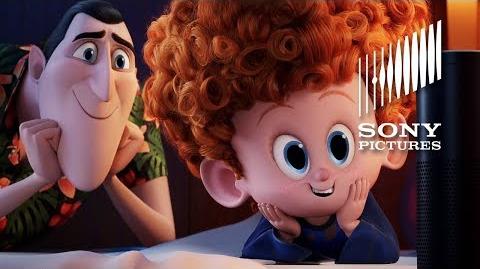 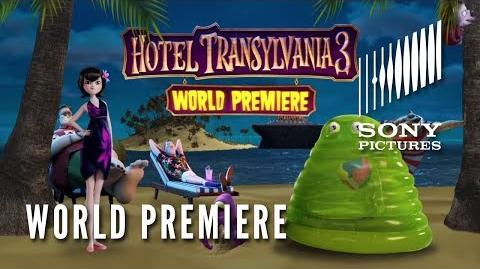 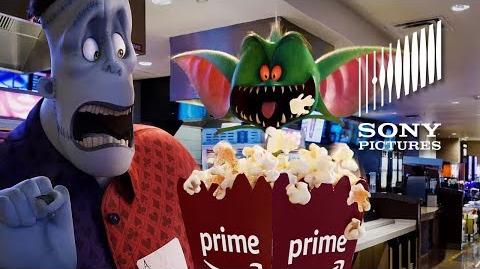 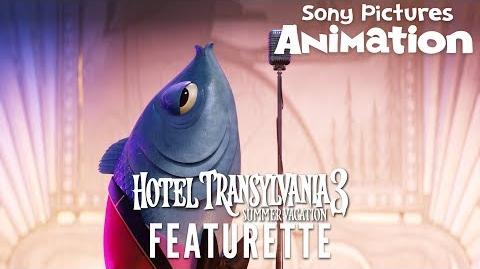 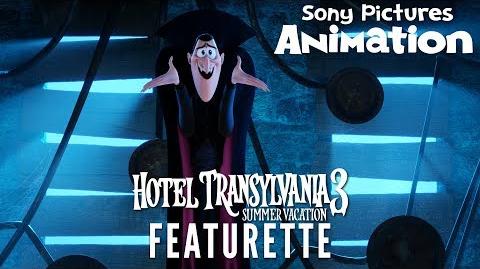