Being brainwashed, getting waked up

Gets freed from Van Helsing's control, and says goodbye to the cruise ship

Kraken is a supporting character and one of the three comic-relief characters in Hotel Transylvania 3: Summer Vacation. He sings the song called "It's Party Time", to the passengers, on the cruise ship.

The Kraken is a massive blue sea creature with long and sharp teeth. His numerous tentacles are shown to be larger than the Legacy.

The Kraken is shown to be very friendly and helpful towards the passengers onboard the ship. Only wishing to sing, and perform for them all.

Under the influence of Van Helsing's hypnotism, however, the Kraken becomes more mindless, ruthless and vicious. He's shown to be destructive and violent, and will attack anybody on sight. However, if affected by music, he will dance to whatever the song is in any way possible.

The Kraken first emerges from under the sea when the Legacy cruise ship arrives at Atlantis. He greets the monsters on board by singing them a song.

Later, Kraken is sleeping in his bed under the sea. However, Abraham uses the music sheet from inside the Instrument of Destruction to play a song that wakes up and hypnotizes Kraken. When Kraken awakes from his sleep, his eyes begin to twitch in beat with he music and turn into an orange-red color.

Kraken emerges from the ocean and begins to violently attack the monsters. Dracula attempts to stop him, but the Kraken quickly injures and suffocates Dracula with his tentacles. Mavis attempts to fly to her father and save him, but Kraken grabs Mavis and slams her back down onto the floor. It then tries to eat Dracula.

Having seen enough, Ericka jumps onto Tinkles and rides him up Kraken's tentacle to save Dracula. Ericka lands onto one of the Kraken's eyes, releasing  Dracula, and Ericka and Dracula fall down to the destroyed floor. But Ericka manages to grab the ledge and save Dracula. After Ericka confesses her love for Dracula, Abraham commands Kraken to attack the two. However, this time Dracula catches Ericka, and saves him and her, before being pushed down into the dance floor by the Kraken's tentacle, injuring Dracula and Ericka. Then, Johnny convinces them that Van Halsing's music is mind controllng him and plans to combact the mind controlling music.

Johnny and Dracula attempt to use upbeat and happy songs to snap Kraken out of this mind control. These attempts work temporarily, but Abraham's music proves to be too strong. Just before Kraken can eat Johnny and Dracula, Johnny turns on the Macarena song. This song proves to work, and frees Kraken from Abraham's control and shred the music sheet,

Kraken is last seen waving goodbye to the cruise ship as it sails back home.

The monsters are frightened by the Kraken

Kraken welcomes the monsters to Atlantis

The hypnotized Kraken attacks the Legacy.

The hypnotized Kraken roars very loudly; about to kill all the monsters 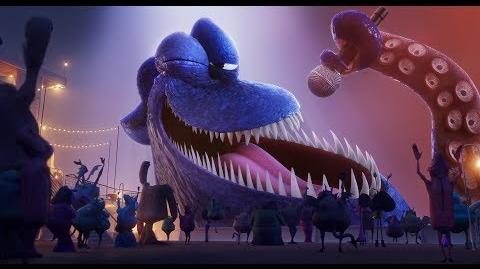 Retrieved from "https://hoteltransylvania.fandom.com/wiki/Kraken?oldid=55770"
Community content is available under CC-BY-SA unless otherwise noted.