To prove to her dad that she can help run the hotel.

Having fun, her friends, making her dad proud

Mavis Dracula is the main protagonist of Hotel Transylvania: The Series. She is Dracula's daughter. She is 114 for most of season 1 until turning 115 in the final episode, and appears to remain 115 for the entirety of season 2.

Mavis is a vampire with pale skin, blue eyes, and short black hair with bangs. Like most vampires she has long and sharp fangs, although they are smaller than her father’s.

Either her makeup or her natural features portray her with black lips, lined eyes, and dusky eyelids.

In bat form her ears and wing webbing are red, in contrast to the purple of her younger cousin Klaus.

Lydia refers to Mavis having "tiny little hands" in Married to the Blob, causing Mavis to retort "I prefer dandy". Mavis is again defensive about her hand-size when this is mentioned a second time later on.

She usually wears a black turtleneck dress with translucent black hosen arm warmers that give her arms a gray complexion compared to her bare face and fingers.

She wears thigh-high black socks with red stripes on them, and red converse sneakers on her feet.

Back when she was 38 years old and smaller she did not wear the arm warmers or the socks, and had her limbs bared like her face.

Mavis is highly energetic, cheerful, curious, and fun-loving. She has high respect and love for her father who took care of her her entire life.

Mavis also cares deeply for her friends, Hank, Pedro, and Wendy. Always hanging out together and helping each other out.

Despite her good intentions Mavis often finds herself in problems and situations that she creates herself, often due to her lack of planning ahead and overconfidence.

Unlike other monsters Mavis has grown out of her fear of humans for the most part (unlike in the first movie, when Mavis was not allowed outside until she turned 118). This is shown when she takes care of a young human toddler (the Cartwrights’ daughter) on a few occasions. However, she is still is unsettled by humans and their behaviours. For example: she and Lydia didn’t know what a diaper was.

Mavis is not always entirely honest, like when she steals Tiffany's wand to help Pedro in Talk Blobbish to Me she says "Tiffany kinda lent me her wand".

She and Klaus spent about 3 weeks wrestling over Phlegm Ball according to Hank N Stein's estimation. So she is able to forgoe sleep at least that long when exerting herself.

Like many vampires Mavis can transform into a bat. She often uses this to get to places faster and reach heights she normally couldn't.

She also has the ability to walk and climb on walls.

Mavis can also manipulate her shadow to take on different terrifying forms. This is seen when she is performing a "Vamp Off", an ancient vampire tradition, with her cousin Klaus.

Like other vampires Mavis can teleport or manifest different objects for her to use. An example of this is seen in the episode Becoming Klaus when she creates a Megaphone to get everyone's attention.

Mavis can change her clothes and appearance at will in an instant. This is seen in several episodes when she needs to change outfits for a certain occasion.

Like her Aunt Lydia she has also tried to teleport by vanishing into a puff of flames. However, due to her young age and inexperience she hasn't been able to pull it off yet.

Mavis initially cannot use her vampire hypnosis powers until the episode Hypnosferatu where she finally learns how, but then by the end promises to never use them again without Lydia's permission first.

Mavis has adored her father ever since she was a young vampire. She has spent her entire life living inside the hotel with him and the other monsters, playing games and having fun with one another. After her mother passed away, the hotel was built to keep monsters safe from humans.

When Dracula announced that he had to leave the hotel temporarily for the vampire council she was heartbroken, but she still did her best to pack her father's luggage with everything he could possibly need, claiming nobody knew him better than she did.

Her possessed doll Demented Debbie was a gift from Dracula. However, Mavis has not played with her in a while, due to Debbie’s clingy personality.

Hank is Frankenstein's son and one of Mavis' best friends at the hotel. Like all her friends Mavis cares a lot for Hank and his well being. At one point Mavis felt bad for Hank that he couldn't play basketball well, so she gifted him new hands that could help him improve himself. Unfortunately for Hank this gift ended up being a nightmare so Mavis sought out to help Hank retrieve his old hands and make things right.

Wendy is the daughter of Bob Blob and one of Mavis' best friends at the hotel. She was made in a laboratory and has been living at the hotel all her life. Wendy consideres Mavis her best friend and is always found by her side when their group is hanging out. Mavis also returns this friendship and cares for Wendy deeply. Wendy lives in the penthouse suite.

Pedro is an undead mummy and one of Mavis' best friends at the hotel. Pedro is a care-free spirit and is always looking to have fun. Despite Pedro getting on Mavis' nerves occasionally she still thinks of him as a good friend. He is quite young for a mummy, being only 75. Murray is his friend and Pedro resembles him. Unlike most mummies, he is not very good at casting curses. He has a big brother named Rusty who is a DJ.

Lydia is Mavis' aunt and the temporary owner and caretaker for the hotel. Mavis and Lydia don't often see eye to eye. While Mavis would rather relax and have fun with her friends Lydia wants to maintain order in the hotel. Mavis always finds herself accidentally aggravating Lydia and consequently enduring her wrath. Despite these differences Mavis still cares about her Aunt and wants to keep her happy.

At one point Mavis unleashes Truth Bugs upon the hotel, attacking and tormenting the other monsters, before Mavis could give up on herself Lydia appeared to reassure her that she was a Dracula and that she does deserve to work at the hotel. After Mavis and her friends successfully destroyed all the Truth Bugs, Mavis asked Lydia again if she meant what she said about her deserving to work at the hotel or if she was just infected by the Truth Bugs. Lydia smiles and tells Mavis that Truth Bugs don't work on Vampires before leaving. Mavis is then embarrassed that she revealed her own secrets.

One reason Lydia is so angry is because she received only one Creepmas present (a large jingle bell) as a child, which traumatized her for years.

During season 2, Mavis begins to show characteristics of Lydia, who effectively serves as her foster mother. In several episodes, when angry, her face turns beet-red just like Lydia's does, although Mavis' hair does not sprout flames. Lydia also compliments Mavis more, while still insulting and frightening her quite often.

In Wand Ambition, Mavis acquires a magic wand, and Mavis' wand is a step towards Lydia's staff. In Best Friends Furever Lydia trusts Mavis with her staff, though Mavis broke it. It turns out Lydia trusted her staff to Mavis because she wanted her to break it, so she could get a new one.

Mavis also acquired a cape like Lydia, and also developed an antagonistic relationship with Krampus. Mavis is able to do a perfect impression of her aunt, even making her voice sound like hers. Lydia seems impressed and pleased by her impersonation.

Gene is Mavis' elderly wheelchair-bound video game loving and caring uncle. Whenever Mavis has a family or vampire related question she turns to him for answers, even when she rushes out with a plan in mind before she gets the chance to hear the downside. Gene is shown to be fond of his niece and doesn't like seeing her in trouble.

Klaus (pronounced “klowsh”) is Mavis' cousin that enjoys getting the better of her. When ever he visits the hotel the two would challenge each other to see which one of them is the better vampire, which has caused them to loathe each other.

Mavis' first kiss was accidentally with one of Quasi's neck boils, as revealed by one of the twins in Better Know Your Mavis

In Goo Crush when instructed to "add your most annoying friends" she brings Hank and Pedro, indicating she finds the twins less annoying.

Mavis sees her reflection for the first time.

Young Mavis asking her father for a Demented Debbie doll.

Mavis in her night dress.

Mavis in her sports outfit.

A young Mavis and Klaus high five each other.

Mavis snarls at Klaus during their Vamp Off. 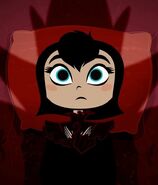 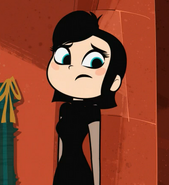 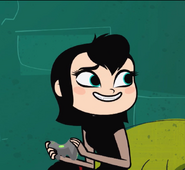 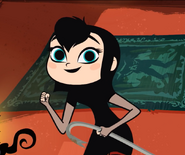 Retrieved from "https://hoteltransylvania.fandom.com/wiki/Mavis_Dracula_(TV_Series)?oldid=59990"
Community content is available under CC-BY-SA unless otherwise noted.