To spend time with Dennis and their family

They continue to celebrate Dennis' birthday at the hotel.

"Don't freak out, no matter how creepy!" - Linda

Mike and Linda Loughran are Johnny's parents, Mavis’ mother-in-law and father-in-law and Dennis's paternal grandparents. They appeared in Hotel Transylvania 2. Mike is voiced by Nick Offerman and his wife Linda was voiced by Megan Mullally. Linda is funny, hilarious, clumsy, goofy and hyperactive while Mike is grumpy, cranky, smart-mouthed, ill-tempered and intelligent. Upon the fact of going to Transylvania, one of them is very scared, although none of them admits it.

They live in Santa Cruz, California. Some of their neighbors are monsters. They, along with the rest of Johnny's family, were invited to Hotel Transylvania for his and Mavis' wedding.

After Dennis was born he didn't show any signs of having inherited Mavis's vampire powers, they, like their daughter-in-law, became concerned about whether it would be safe for Dennis to live at Hotel Transylvania (and, by extension, in Transylvania itself). Though they mean well, they end up accidentally insulting Dracula and Mavis. One of the primary examples is when Johnny and Mavis came to visit and they made a makeshift coffin for her to sleep in.

They later show up to attend Dennis' fifth birthday dressed up as Zombies to hide their human identity from Dracula's father, Vlad. After Johnny reveals that he is a human to Vlad, Mike and the rest of the family stands up to Vlad by removing their costume makeup and revealing they are human too.

Later, the two of them a long with everyone else journey into the nearby forest to look for Dennis after he ran away. The two of them and help in fighting off Bela's army.

They are last seen attending and dancing at Dennis' fifth birthday party.

Linda is the happy and perky wife of Mike. She is also nice to Mavis when she and Jonathan first arrive in California by giving Mavis a new sunhat to wear to protect her from the sun, and even invites over some other monster/human couples to make Mavis and Johnny feel better. Unknown to her that it makes Mavis feel uncomfortable.

When Vlad comments that Mike and Linda smell funny, Linda just assures him that it's because he's European and doesn't know what deodorant is. Her husband Mike sighs at this comment, sounding annoyed as he comments back "Nothing like insulting an entire continent, Linda."

Mike is the grumpy but caring husband of Linda. All four of his children appear to have inherited his red-hair. Unlike his wife, Mike doesn't seem to mind the monster culture and is comparably more accepting of it, and does his best to respect it. However, he does seem to not like Dracula that much at first. He's annoyed at how Dracula calls his grandson, Dennis, Denisovich. He also thinks that Dennis should move to Santa Cruz with him and the rest of the family where he'd be more safe and accepted since Dennis shows more signs of being a human rather than vampire.

At the dance, Dennis freezes dancing Linda. Then he dances. 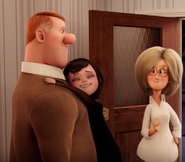 Retrieved from "https://hoteltransylvania.fandom.com/wiki/Mike_and_Linda?oldid=55854"
Community content is available under CC-BY-SA unless otherwise noted.