Puppy! is an animated short film directed by Genndy Tartakovsky. The short premiered alongside The Emoji Movie on July 28, 2017.[1]

The short begins with Dennis asking his parents, Mavis and Jonathan, if they could get a puppy. Mavis regretfully tells Dennis they can't and that raising a pet is a big responsibility. Johnny tries to intervene by suggesting they could get him a goldfish instead but before he can finish Dennis cries out in sorrow, transforming into a bat and flies away wailing “I WANT A PUPPY!!!”

As Dracula is wandering through the hotel he notices Dennis sitting sadly on the ledge near the window. Dracula asks Dennis what's wrong and Dennis tells him that his parents won't let him get a puppy. Dennis quickly cheers up and asks Dracula if he could get him a Puppy. Dracula is hesitant at first but quickly gives in after seeing Dennis' pouty bat face.

Dennis is seen playing with his toys with Johnny on the floor as Mavis reads a book on the couch. A knock is then heard at the door. Dracula opens up, but before he can speak, gets knocked into the room with extreme force, crashing into a wall. A gigantic blue dog bursts its way into the room panting loudly. Dennis' face lights up and jumps up to hug his new friend. Mavis looks at her father angrily but Dracula insists that every monster needs a good pet. Dennis named the mutt, Tinkles. Mavis looks over at Tinkles to see that he has had an accident. Mavis runs over in panic exclaiming "My living room!!"

The following night Dracula is sleeping in his coffin when Mavis calls out asking him to look after Tinkles for them while she takes Dennis to school. Dracula groggily agrees and goes back to sleep. Immediately after Tinkles wakes up Dracula needing to go to the bathroom. Dracula takes Tinkles outside only for him to now be hungry. Dracula leaves and brings back a wheel barrel of meat, but first requests Tinkles to do a variety of tricks before he can eat. This works well until Drac says "Speak!" which Tinkles responds with "Hi. How are you?" surprising him.

Dracula returns to the front desk where he continues to check in guests, growing increasingly annoyed by the giant dog behind him. A witch maid comes to Dracula and informs him of the skeleton family checking into the hotel. As the skeletons enter, Tinkles rushes over to them to chew on their bodies. Trashing the lobby in the process. Mavis enters the hotel with Dennis and looks at the mess with horror, asking her father what happened. Dracula then pointed to the dog and said "Tinkles happened". Then, the camera pans to Tinkles, chewing at least half a dozen of the skeleton guest, some escape from a few chews. The short ends with Dracula sighing and telling the audience that he needs a vacation. 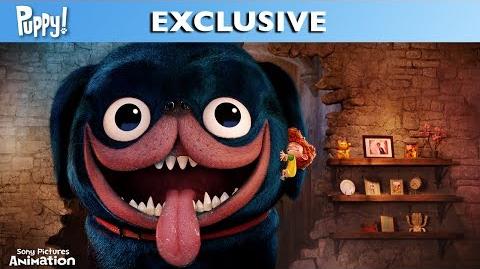 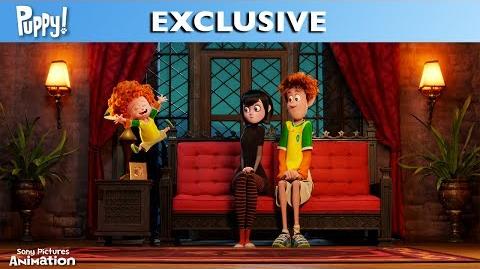 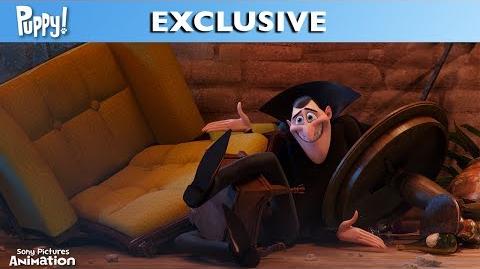 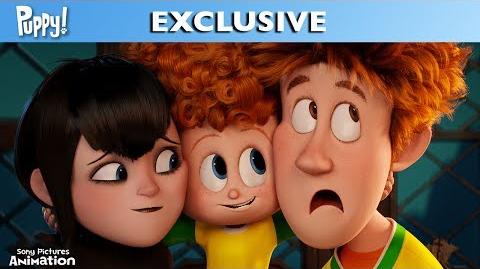 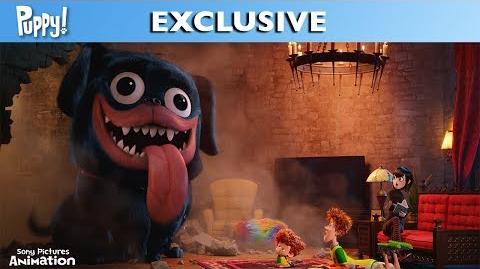 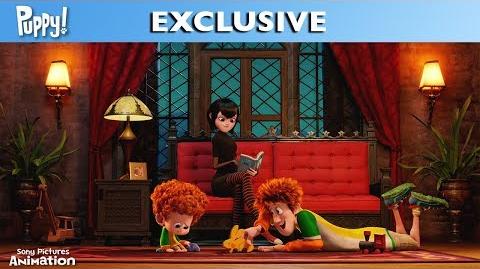 Retrieved from "https://hoteltransylvania.fandom.com/wiki/Puppy!?oldid=47700"
Community content is available under CC-BY-SA unless otherwise noted.