Quasimodo from The Hunchback of Notre Dame

Not cooking humans; Not making the right cuisine for Dracula

"Ha ha, Quasi wins again! When you bump with the hump, you land on your rump!"

He was first seen with Dracula, who is about to hide a human, Jonathan Loughran. Dracula claimed that there were no humans around. He complained to Quasimodo that he needed spleens in blankets instead of the dish that was already made (which was Deviled Lizard Fingers). Quasimodo also frequently acted mean against his sidekick, but treated Esmeralda, his pet rat, nicely. The same thing happens when everyone was near the pool.

Later, after Dracula and Jonathan experienced real fun by jumping through floating tables, Quasimodo kidnapped Jonathan while knowing he was a human the whole time. He was pursued by several knights, only to give them the slip and headed to the kitchen. He tried to rotisserie him, but was interrupted by Dracula. He dared Jonathan to scare Esmeralda to prove he wasn't human, which failed and proved otherwise. Dracula had Quasimodo paralyzed by magic. After the duo left, his sidekick had revenge by making him stuck picking his nose.

At Mavis' party, Quasimodo and Esmeralda crashed in to expose Jonathan in front of everybody. He couldn't speak perfectly due to being paralized, but The Fly knew how to speak frozen and translated for everyone. This causes everyone to panic and ruined everything. During the last scene, he was still stuck and had werewolf puppies playing with his frozen body.

Quasimodo has fair skin, yellow eyes, grey hair, and a big nose. He wears a chef uniform with green stockings and brown shoes with a white bandana around his neck. 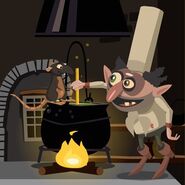 "When you bump with the hump, you land on your rump!"

Quasimodo shaking his butt for victory

Quasimodo with the Fly.

Quasimodo being licked by the Werewolf Kids while frozen 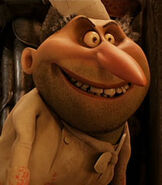 Quasimodo face closeup
Add a photo to this gallery
Retrieved from "https://hoteltransylvania.fandom.com/wiki/Quasimodo_Wilson?oldid=56086"
Community content is available under CC-BY-SA unless otherwise noted.